Skip to content
Libraries and Hours Ask a Librarian

“The AbioCor device itself is totally implantable. An external tool – a coil – transfers battery power through the skin and into the device. A full charge can last 30 to 40 minutes. The external portion can also be plugged into an electric outlet if the patient remains in one area.” -www.masshightech.com

Dr. Lederman has 6 U.S. patents relating to the artificial heart:

After Cornell, Robert Langer graduated from MIT with a Ph.D. in 1974. He is now the Kenneth J. Germeshausen Professor of Chemical and Biomedical Engineering at the Massachusetts Institute of Technology.

One of history’s most prolific inventors in medicine, Dr. Langer’s 500 issued and pending patents have been licensed or sublicensed to over 100 pharmaceutical, chemical, biotechnology and medical device companies; a number of these companies were launched on the basis of these patent licenses. Langer pioneered the field of controlled drug delivery using biodegradable polymers. He was the first to engineer synthetic materials that allow for the precisely timed release of chemicals through surgical implants inserted directly within the diseased tissue. Langer’s controlled delivery techniques have been used to treat brain cancer right at the source instead of through damaging chemotherapy. Through Langer’s innovations, the controlled drug delivery industry has become a multibillion-dollar-a-year business that prolongs and saves thousands of lives.

Dr. Langer’s most recent work is with tissue engineering and human tissue regeneration. His goal is to engineer a synthetic framework on which to grow human cells.

Dr. Langer is the only active member of all three US National Academies–Engineering, Sciences, andMedicine.

Pioneer in Research and Development of Compound Semiconductor Materialsand Devices

Fully half of the world’s annual sales of compound semiconductor components are based on Woodall’s pioneering research in that area, and he is the inventor of many electronic and optoelectronic devices commonly seen in modern life, including the red light-emitting diodes (LEDs) used in indicators and stop lights; the infrared LEDs used in CD players, TV remote controls and computer networks; the high-speed transistors used in cell phones and satellites; and high-efficiency solar cells used to power satellites. 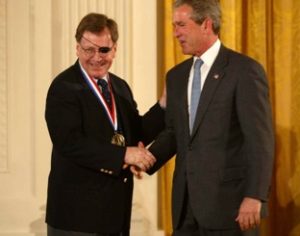 David Welch, Ph.D. is the Chief Technical Officer and co-founder of Infinera, a fiber optic systems company founded in 2001. Infinera is focused on creating new strategic advantages for customers through innovative and disruptive technologies.

Prior to this he was CTO and Vice President of Corporate Development for SDL where his responsibilities include overall technology direction and merger/acquisitions. Dr. Welch joined SDL, Inc. in 1985 as a research scientist and has also held positions of Vice President of R&D and Vice President of the Systems Business Group. He has worked on the development of advanced optical technologies for fiber optic communications, and has published over 250 articles and authored over 50 patents.