Skip to content
All library locations are currently closed to undergraduate students and visitors. Others please check hours.
Libraries and Hours Ask a Librarian 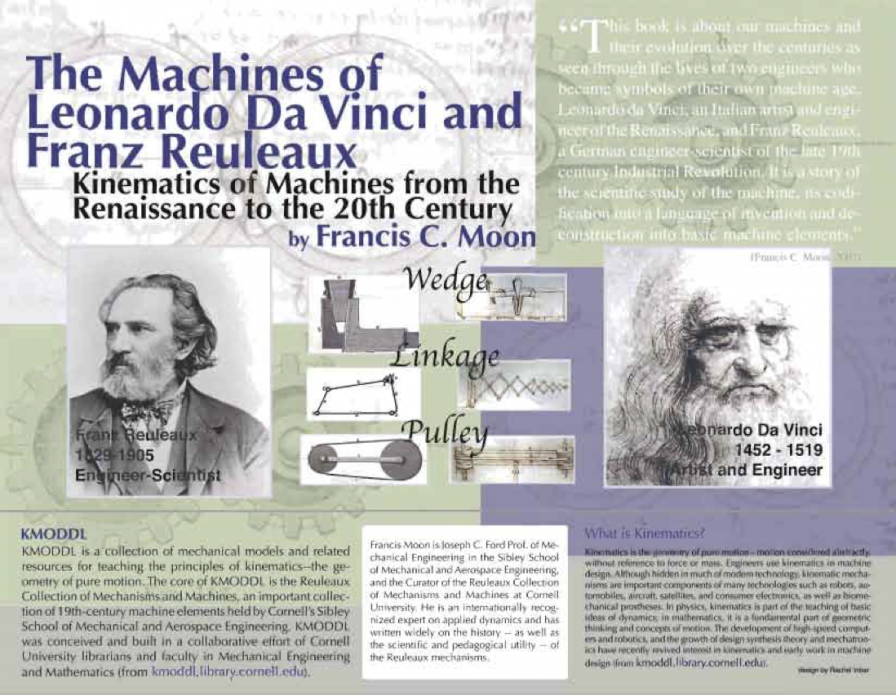 “This book is about our machines and their evolution over the centuries as seen through the lives of two engineers who became symbols of their own machine age: Leonardo da Vinci, an Italian artist and engineer of the Renaissance, and Franz Reuleaux, a German engineer scientist of the late 19th century Industrial Revolution. It is a story of the scientific study of the machine, its codification into a language  of invention and its deconstruction into basic machine elements.” – Francis C. Moon, 2007

Francis Moon is Joseph C. Ford Prof. of Mechanical Engineering in the Sibley School of Mechanical and Aerospace Engineering, and the Curator of the Reuleaux Collection of Mechanisms and Machines at Cornell University. He is an internationally recognized expert on applied dynamics and has written widely on the history – as well as the scientific and pedagogical utility – of the Reuleaux mechanisms.

KMODDL is a collection of mechanical models and related resources for teaching the principles of kinematics–the geometry of pure motion. The core of KMODDL is the Reuleaux Collection of Mechanisms and Machines, an important collection of 19th-century machine elements held by Cornell’s Sibley School of Mechanical and Aerospace Engineering. KMODDL was conceived and built in a collaborate effort of Cornell University librarians and faculty in Mechanical Engineering and Mathematics (from kmoddl.library.cornell.edu).

Kinematics is the geometry of pure motion – motion considered abstractly, without reference to force or mass. Engineers use kinematics in machine design. Although hidden in much of modern technology, kinematic mechanisms are important components of many technologies such as robots, automobiles, aircraft, satellites, and consumer electronics, as well as biomechanical prostheses. In physics, kinematics is part of the teaching of basic ideas of dynamics in mathematics; it is a fundamental part of geometric thinking and concepts of motion. The development of high-speed computers and robotics, and the growth of design synthesis theory and mechatronics have recently revived interest in kinematics and early work in machine design (from kmoddl.library.cornell.edu).